Jennifer Gittins and her husband Michael van den Winkel spend their days working next to each other, but when they’re on the clock, it’s all shoptalk. After locking up Noorden and Little Sister, it’s only a five-minute walk home, where they unwind over a meal and some much-needed catch-up.

“Ours is the ugliest house on the street,” says van den Winkel. The couple bought this 80-year-old midtown semi 17 years ago and never got around to checking off all the boxes on their to-do list. They redid the kitchen shortly after moving in—it was a gut job that required tearing down a wall to add more light and counter space—but they didn’t have the budget for granite at the time. Now that they do, there’s no point putting in new counters since they’d want to re-do the entire, already-dated room.

Gittins and van den Winkel start their mornings with multiple cups of coffee, and homemade granola with fruit and plain yogurt. During the day, while running errands for their restaurants, they’ll hit up Chinatown for specialty produce like mustard greens, galangal and lemongrass. If they’re on Spadina around lunchtime, they find it hard to ignore the siren call of Dumpling House. (They’re both obsessed with the fennel-pork dumplings.) When it comes to dinner, Gittins says the key to an amazing late-night meal is speed, and her husband has mastered the 15-minute meal. He’ll either whip up a salad, a pasta or a spicy stir-fry. 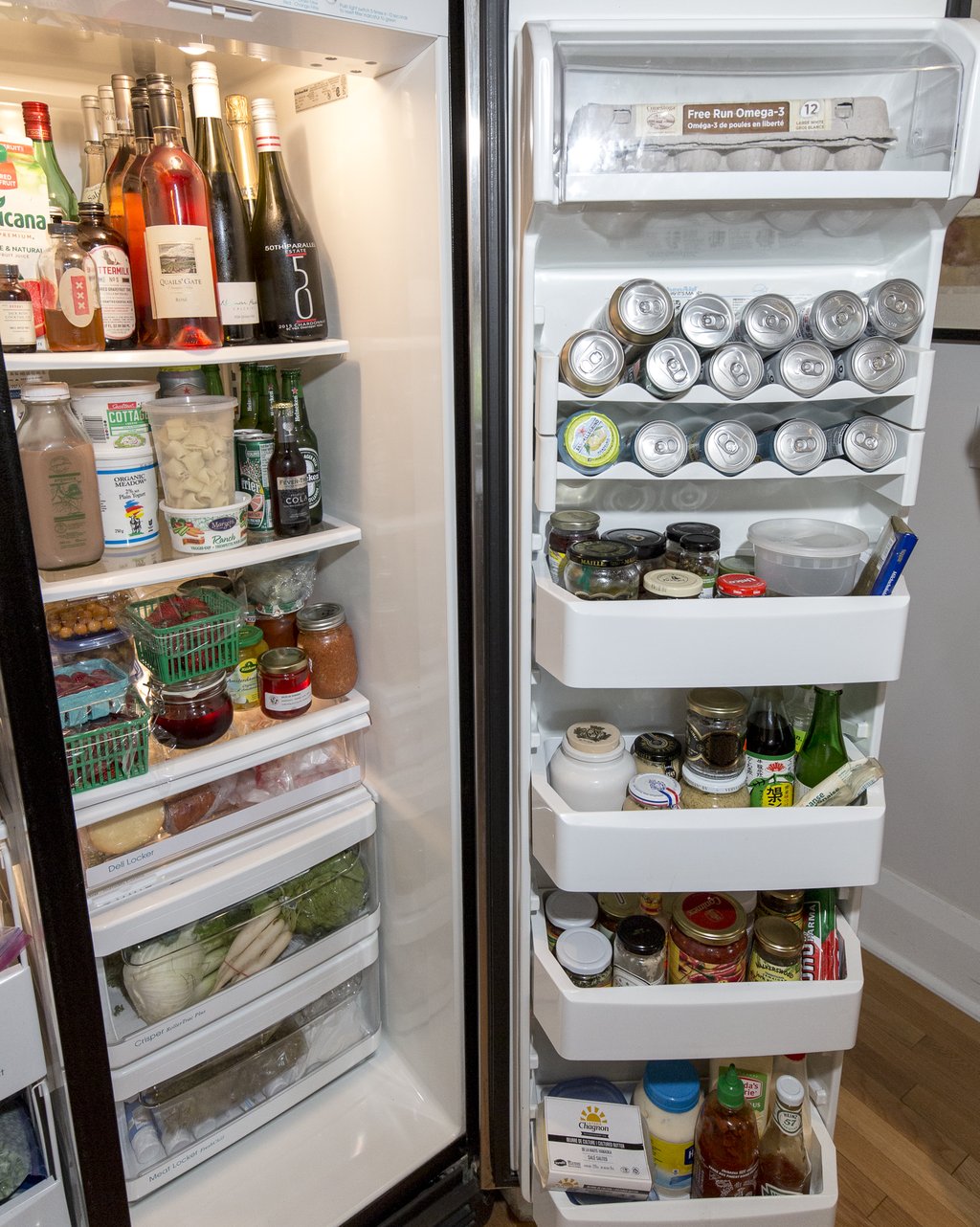 When they’re shopping for themselves, the couple tends to stick to stores in their neighbourhood. They’re loyal Butcher’s Son fans and buy all of their protein there—Matthew Kumprey’s burgers are the only ones in town van den Winkel will eat. “He can’t understand how Americans eat burgers,” Gittins says. “He won’t even eat the bun—just the patty.” (Van den Winkel proudly claims he’s never had a Big Mac in his life.) 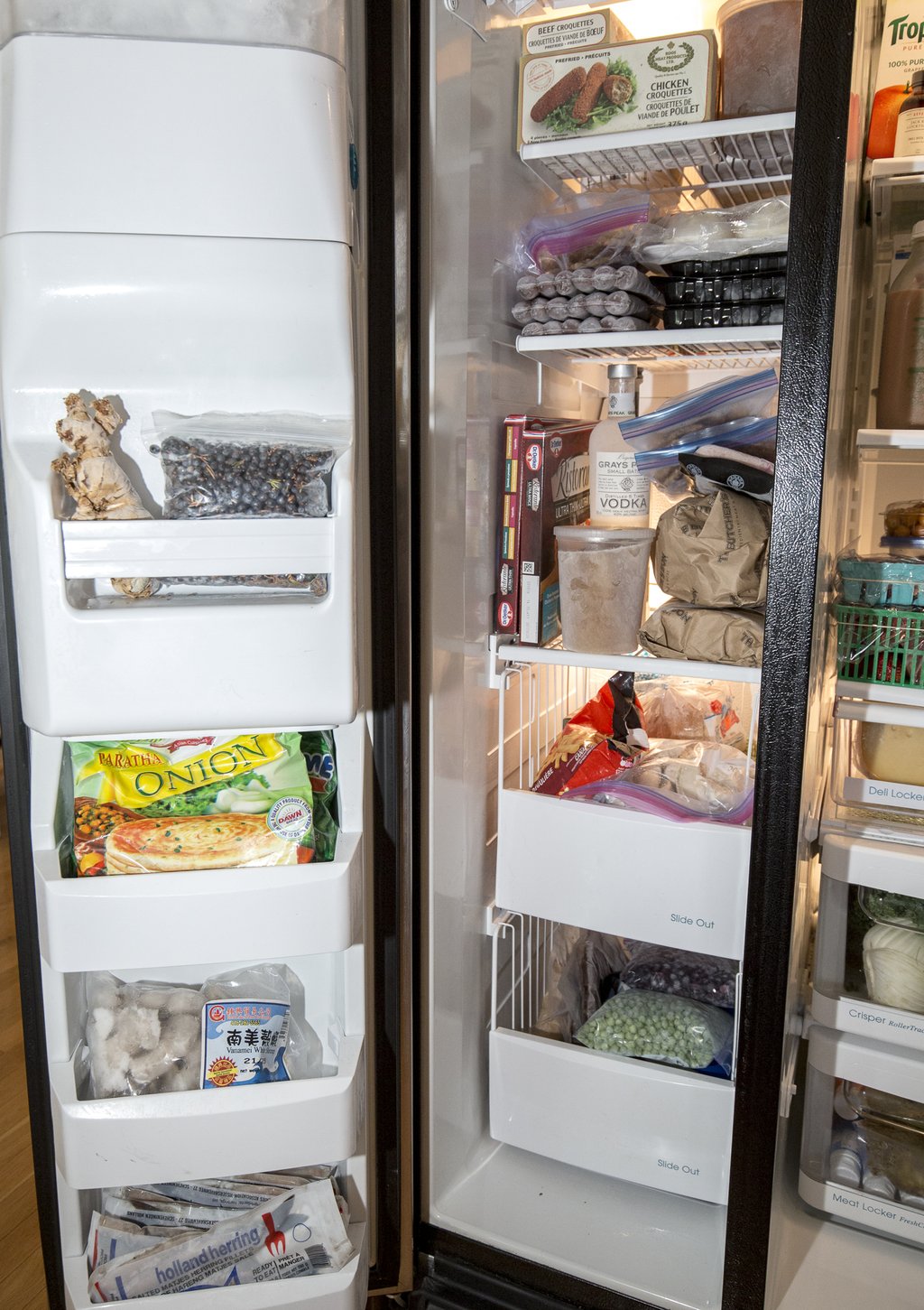 La Salumeria is another one of their favourite spots, for its impressive selection of charcuterie, cheeses, oils and vinegars. Gittins loves their deli sandwiches, too. “You say to Carlo, ‘Just make me something,’ and he does and it’s amazing and it’s only $5.99,” she says. When it comes to bread and pastries, they think Thobors has the best stuff in midtown—van den Winkel will polish off one of their poppy seed baguettes in a single sitting. One of the few shops the couple makes special trips to is the Holland Store in North York. There, Netherlands-born van den Winkel buys all of his favourite Dutch treats. They sell everything a homesick Hollander could want, including black licorice and frozen herring.

Here’s one of their pantries: 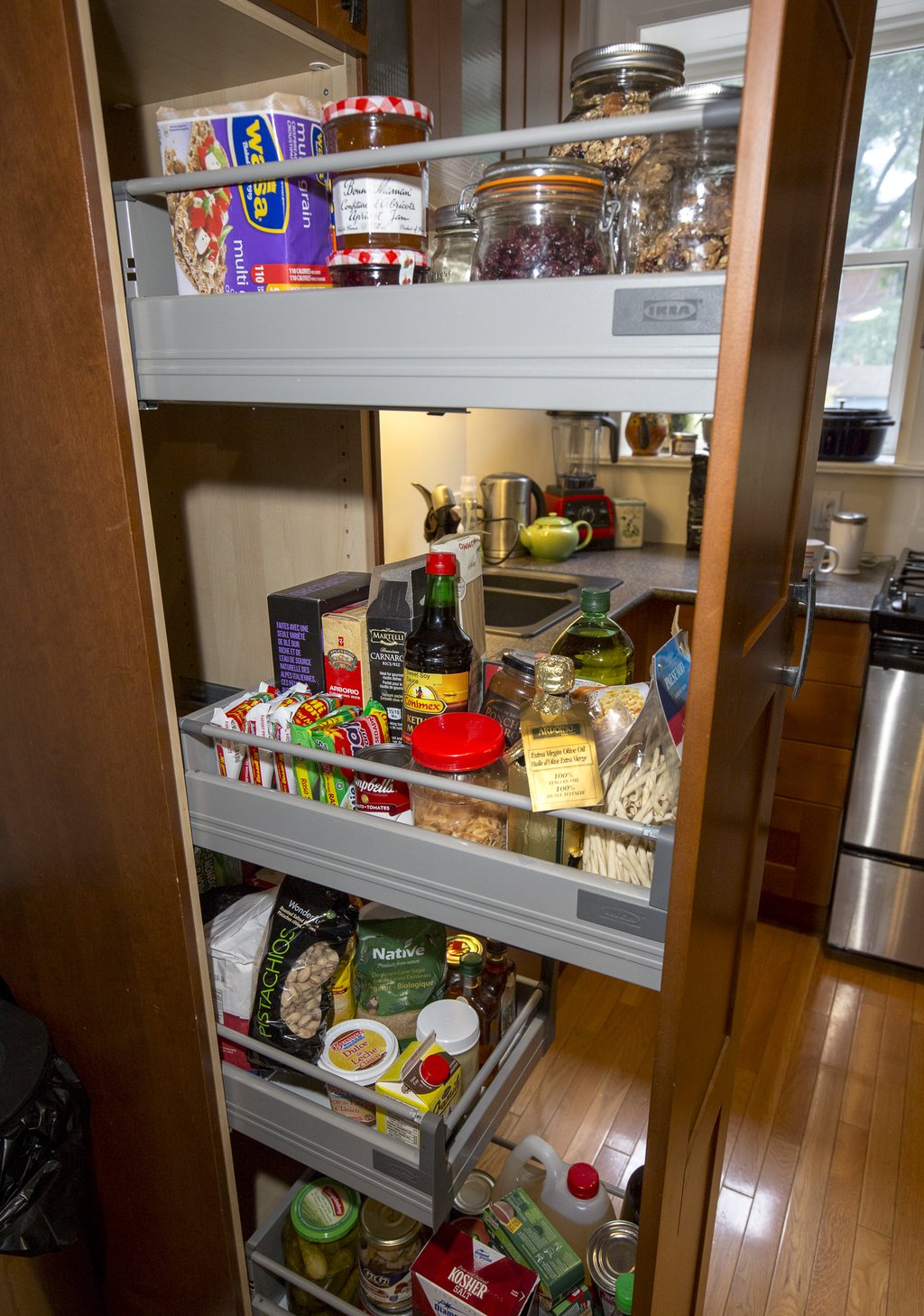 This pantry is devoted to junk food: 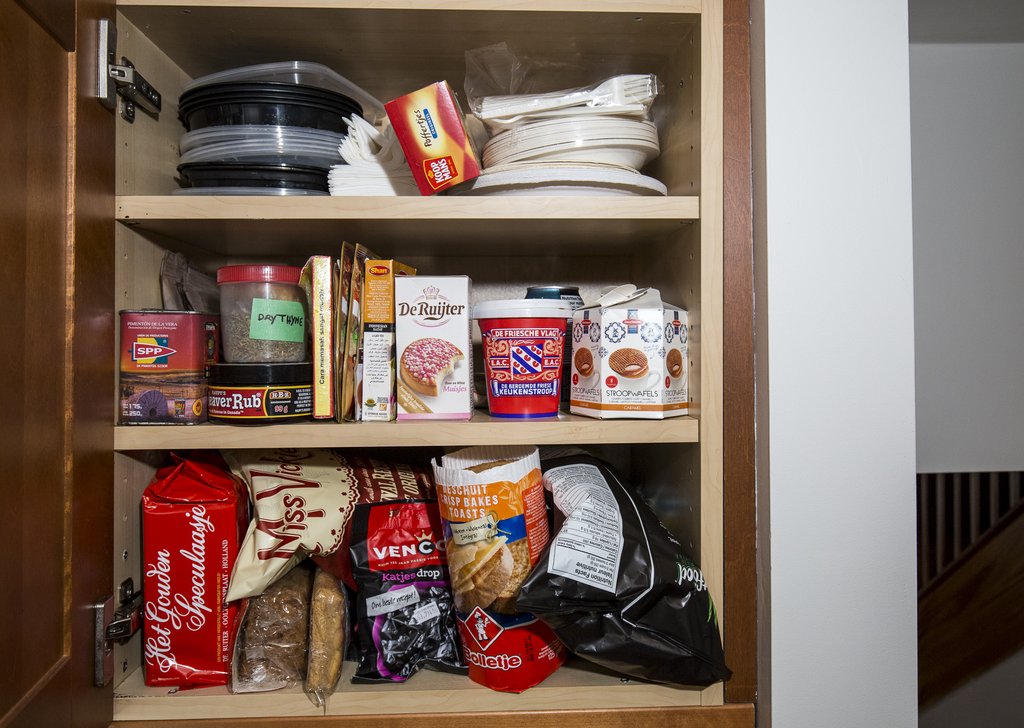 According to van den Winkel, the proper way to eat a stroopwafel is to balance it over the side of your coffee, so that the steam turns the waffle’s filling into a gooey, delicious mess:


This is where things start to get spicy: 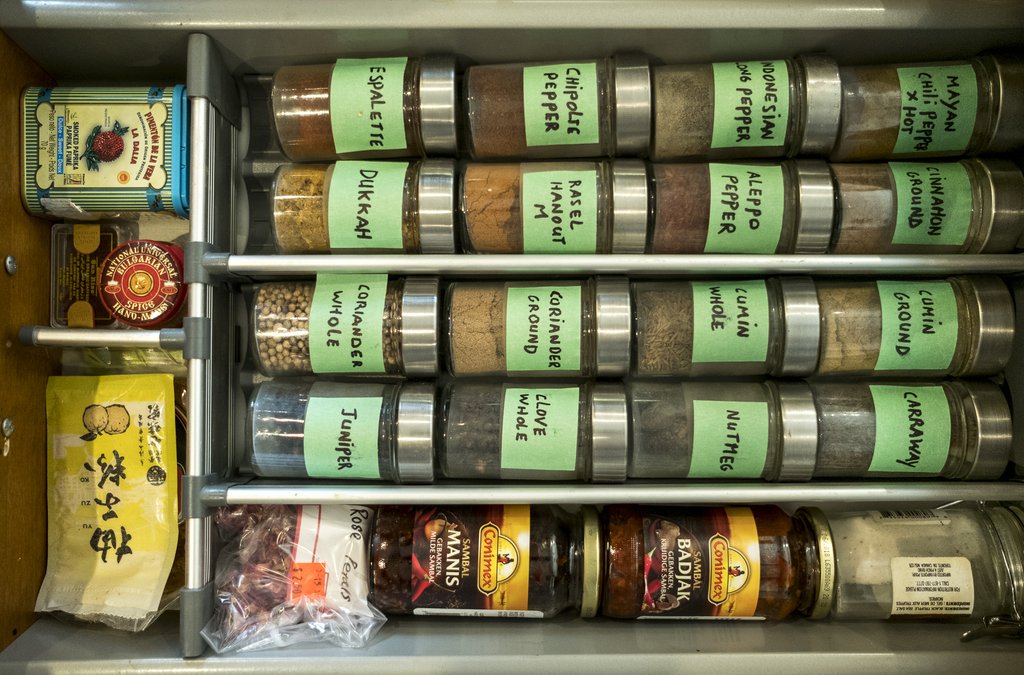 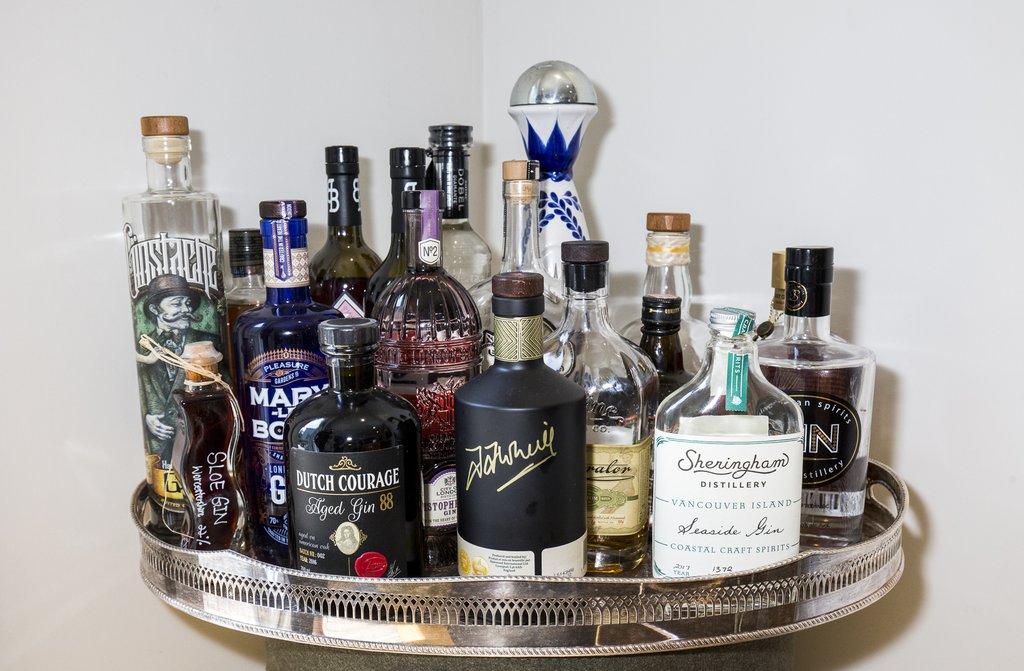 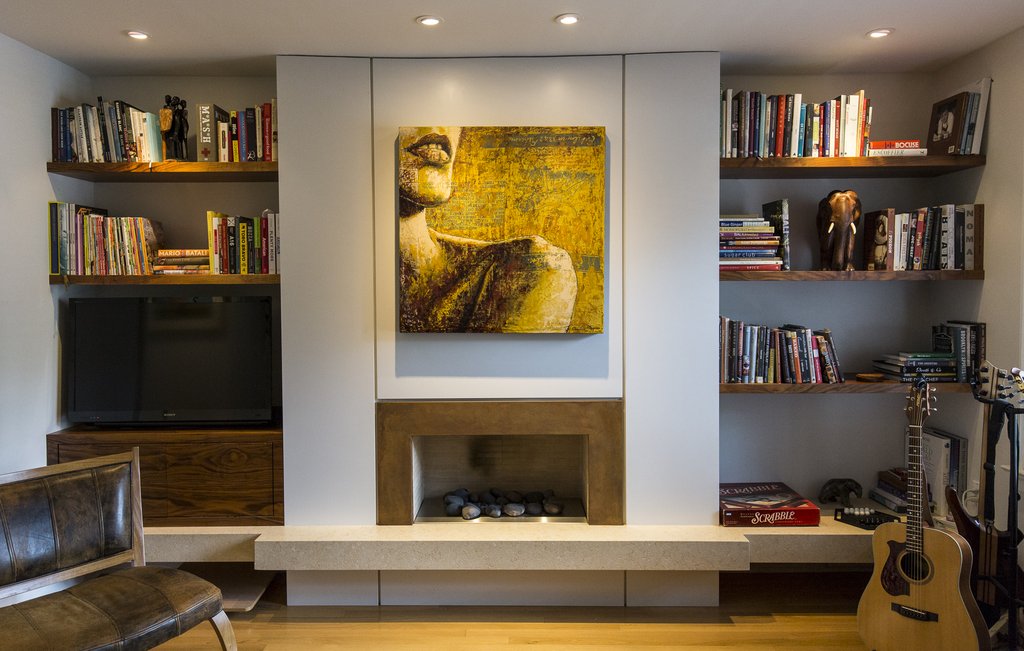 Van den Winkel, all up in his own grill:


And the final spread, including frikadellen sausages and some ossenworst, a raw beef sausage spiced with cloves, mace and nutmeg: