Matthew Ravenscroft is infatuated with vegetables. “Vegetables are really interesting. They’re more challenging to cook than meat, and there are so many possibilities that haven’t been explored yet,” says the 29-year-old, before adding that plant-based cooking “is the future of dining.” Although Ravenscroft helms the kitchen at Rosalinda, a vegan Mexican restaurant, he doesn’t consider himself a vegan chef. “I’m a vegetable chef,” he says. An omnivore now, Ravenscroft actually used to follow a vegan diet—when he worked at a wing joint, funny enough.

Working at Rosalinda has influenced the way Ravenscroft eats, though. These days he eats way more vegetables than he does meat, and he puts a huge emphasis on buying sustainably sourced Ontario-grown and -raised products. And—since moving in with his fiancée, Kate Chippindale, last year—Ravenscroft has transitioned from a diet of whiskey and Cinnamon Toast Crunch to one of collagen-boosted green smoothies, balanced dinners and wine. The couple met two years ago at The Drake Commissary: Ravenscroft was heading up the catering program, and Chippindale worked at Drake HQ in the marketing department. “I courted him,” says Chippindale. “It’s such a millennial story, but I slid into his DMs.” It wasn’t until the Drake’s block party that September that they became serious. It was a tarot card reading that convinced Ravenscroft to ask her out. (The cards told him that he “was pushing against something he should let flow,” and he does admit he was worried about dating someone he worked with.) 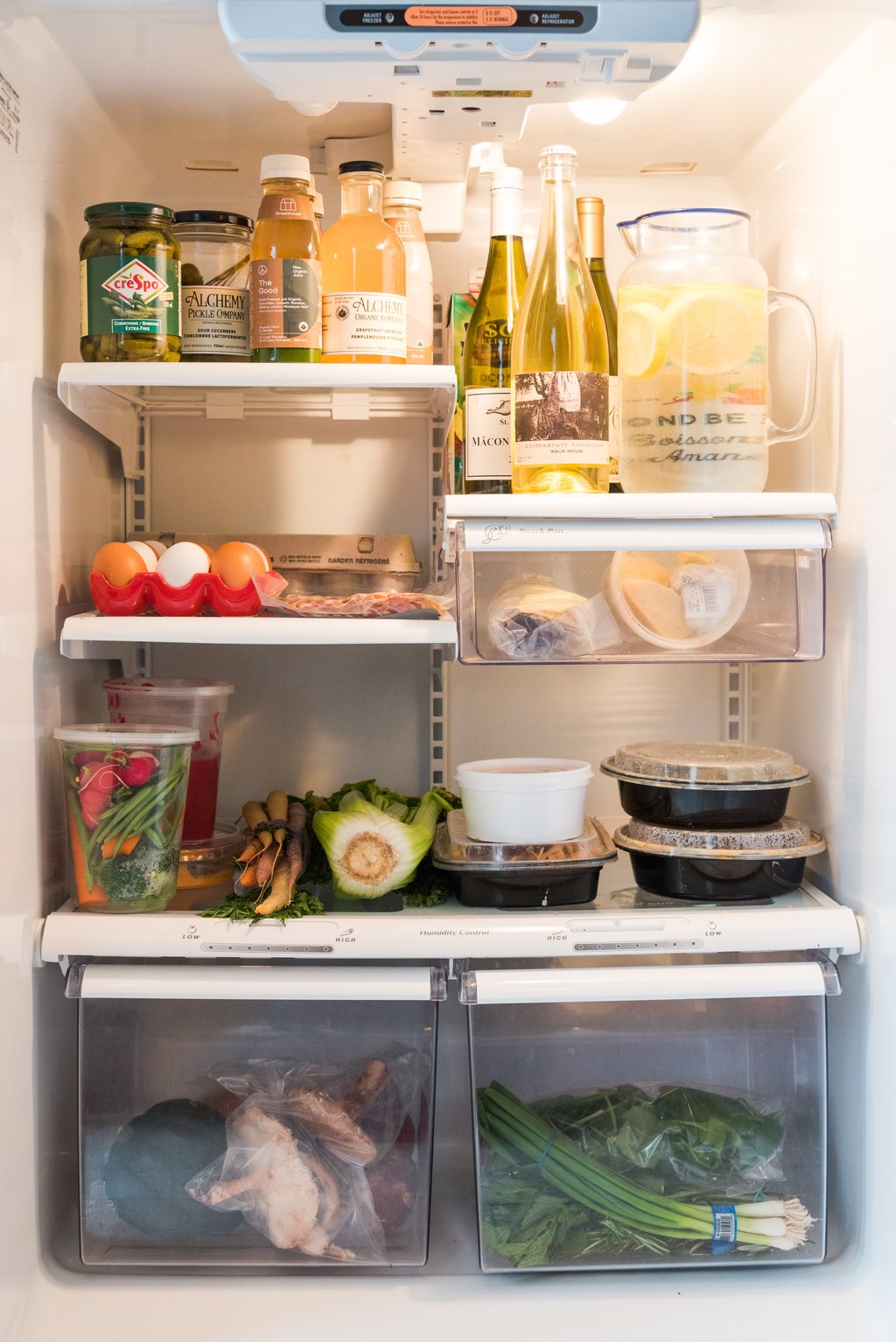 Shortly after, Ravenscroft moved into Chippindale’s gorgeous Dundas West Victorian that she had been renting with a few girlfriends. After a few months of “four’s company,” the roommates moved out. “We’re hoping to start our family here,” says Chippendale, who adores the two-storey home. Ravenscroft doesn’t miss his old apartment one bit. “I just slept there—the only thing I ever cooked in the kitchen was a massive grilled cheese made out of an entire loaf of bread,” he says. Ravenscroft loves how bright and spacious their kitchen, and that the stove has a gas range for cooking. He also appreciates the stone countertops, which can take the heat of hot pots. The other boon is the living room: the 12-person dining table allows for some epic dinner parties. 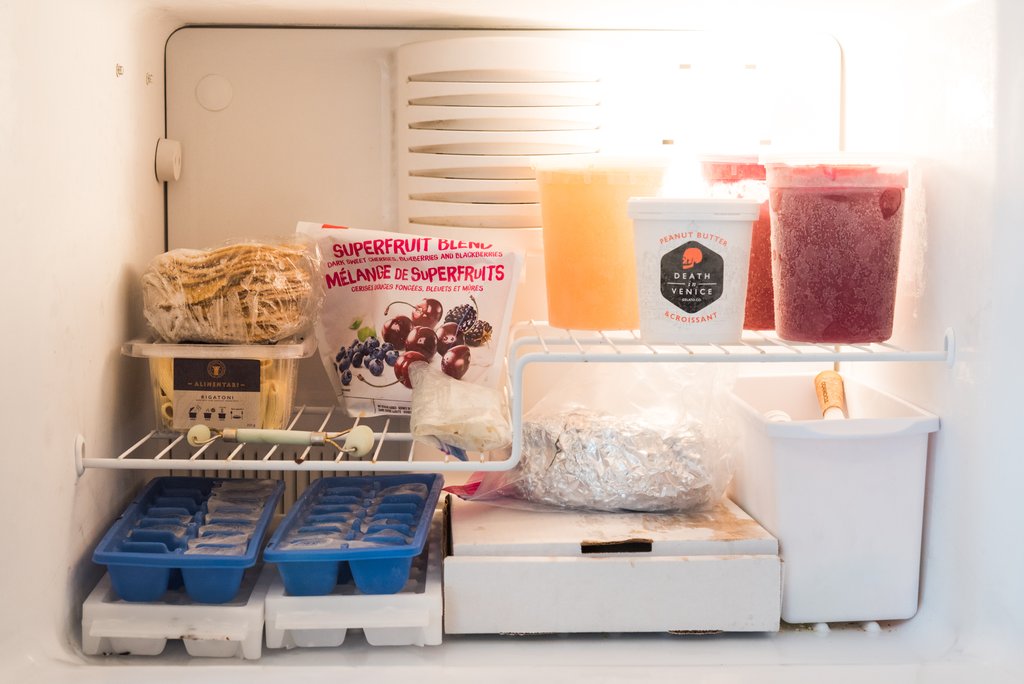 On workdays, Ravenscroft gets up at 7:30 a.m. and lounges in bed for a bit before heading downstairs to make coffee. He loves the process of making pour-over coffee, and grinds his beans by hand using a Japanese grinder. He’ll weigh out the coffee using his Chemex to brew the perfect cup. When it comes to the beans, he’s a bit of a coffee philanderer: some mornings he uses Pilot’s, other days, Detour’s or Sam James’s. Recently, he brought back a bag of Origin coffee from the U.K.

Ravenscroft walks Chippindale to work every day. After dropping her off at the Wealthsimple offices, Ravenscroft turns on a podcast and walks to Rosalinda, where he has what he calls French breakfast: black coffee and a vegan brioche bun. After that, he won’t eat anything until the staff meal at 3 p.m. If it’s his turn to cook, he usually makes some kind of vegan pizza or curry. Then it’s nothing until he gets home at 10 p.m. Chippindale usually leaves him some dinner in the fridge (she made a vegan, gluten-free celeriac lasagna the other week that he loved). If she’s out for the night, however, Ravenscroft returns to his old bachelor ways and makes himself a giant bowl of cereal. 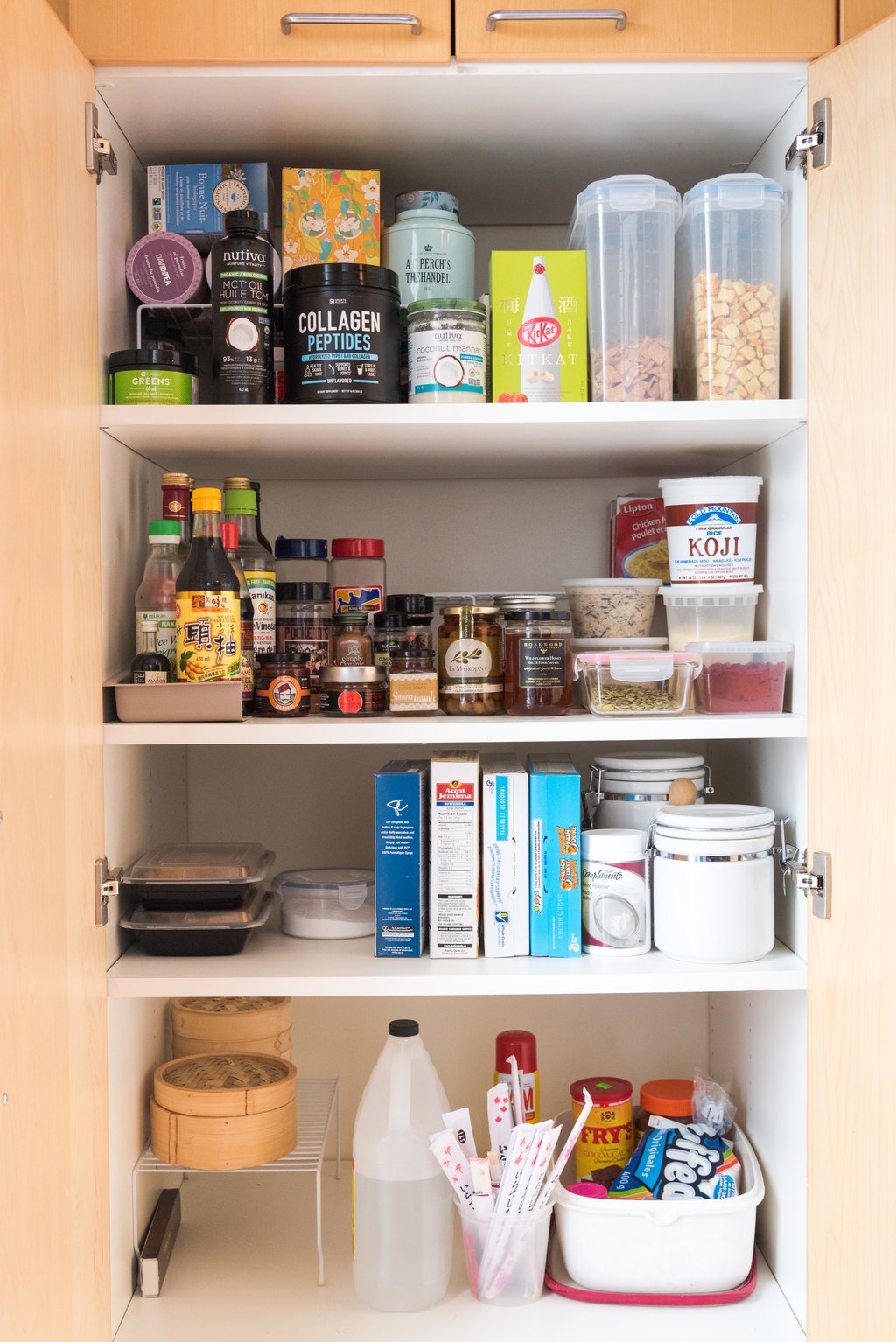 Sundays are date days for the couple as it’s the only day they have off together. If they don’t have breakfast at home (Ravenscroft makes a morning salad that he refers to as a “banger,” which is basically a deconstructed breakfast sandwich), they’ll head over to Bar Raval for brunch. After noshing on blood sausage and croquettes, they head to Kensington Market to get groceries. After, they hit up Blackbird for bread (although not exclusively—they also like Prairie Boy, the Drake, Bar Raval and Enoteca Sociale), Cheese Magic for cheese, Sanagan’s for meat (though they love Côte de Boeuf’s bacon and eggs), and Kensington Fruit Market for produce. They think the Portuguese greengrocer offers the best value and carries the freshest stuff in the market. Ravenscroft also likes to check out the chilies at Perola; he’ll buy any peppers he’s unfamiliar with so he can experiment with them. 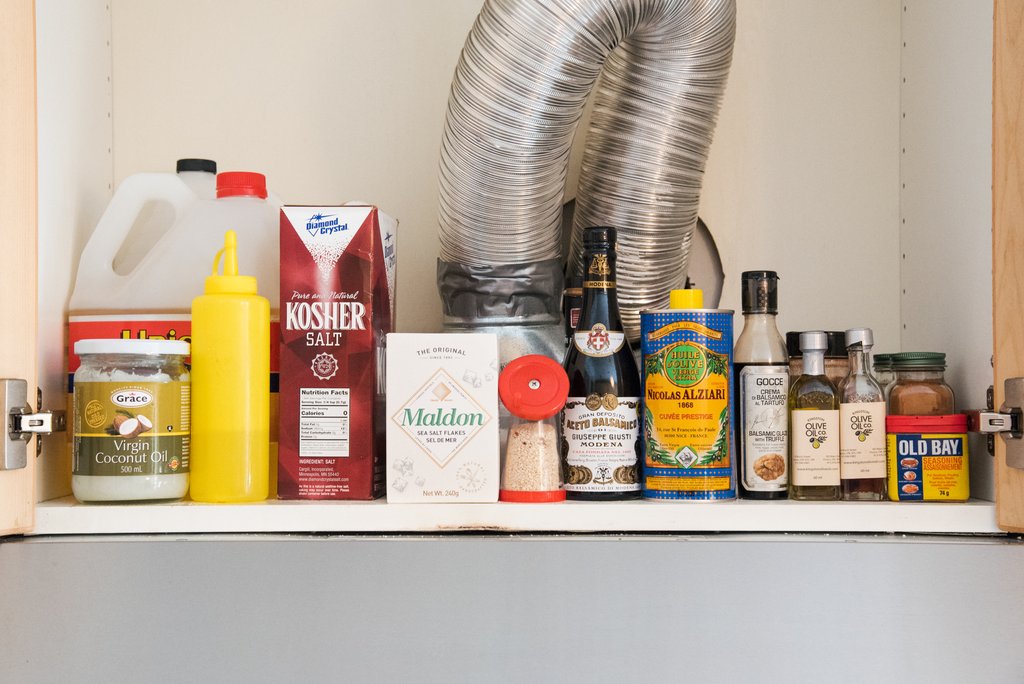 For most of his adult life, Ravenscroft only drank Jameson, but his tastes have matured and he now prefers Woodford Reserve bourbon and the odd mescal. On a recent trip to Mexico, Ravenscroft tried wine for the first time. He decided he liked the stuff, and now he has a proclivity for the weirder ones, like skin–contact and natural wines: 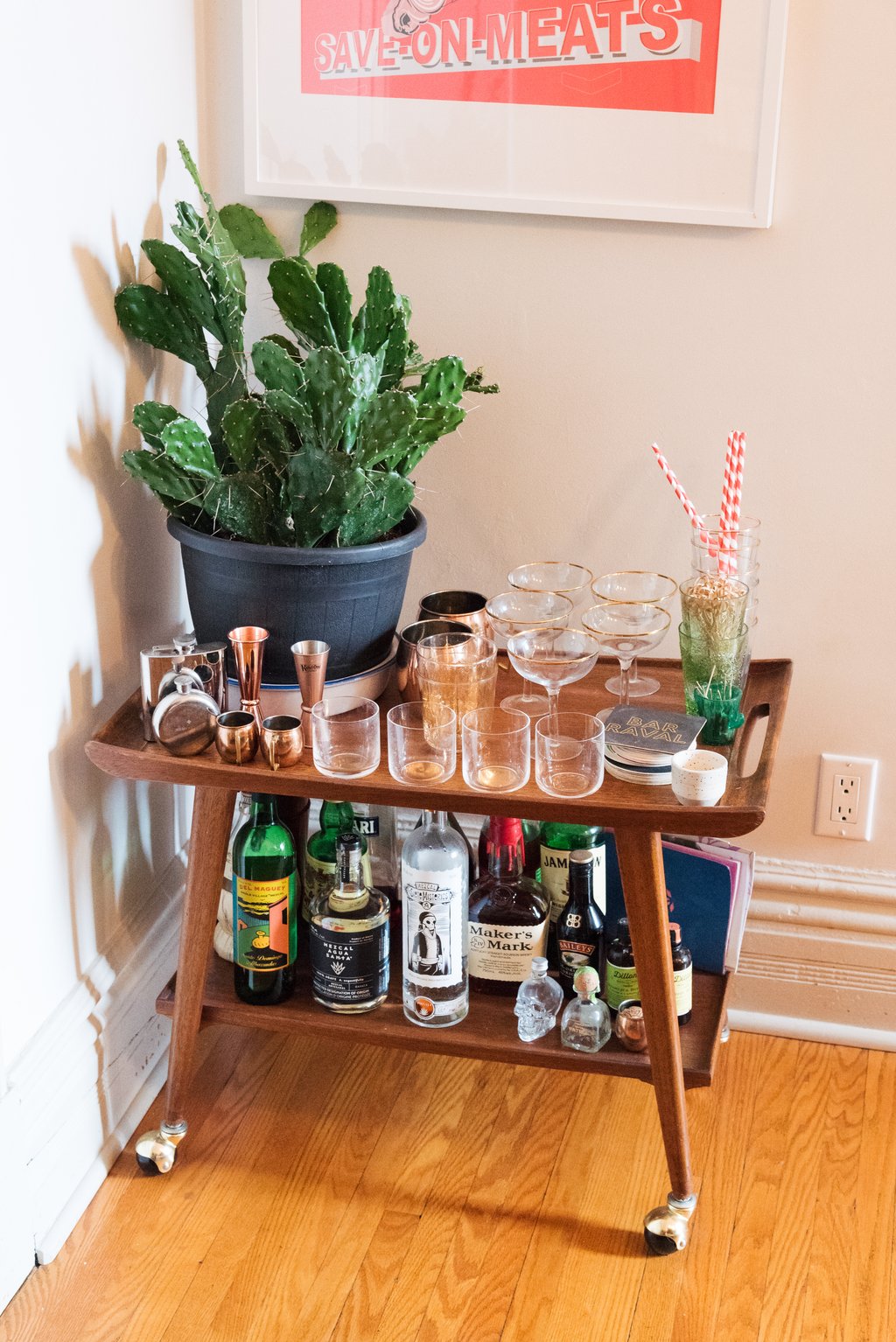 Ravenscroft never cooks recipes from the books in his collection. He likes to thumb through them for inspiration, though, and he appreciates them as art objects: 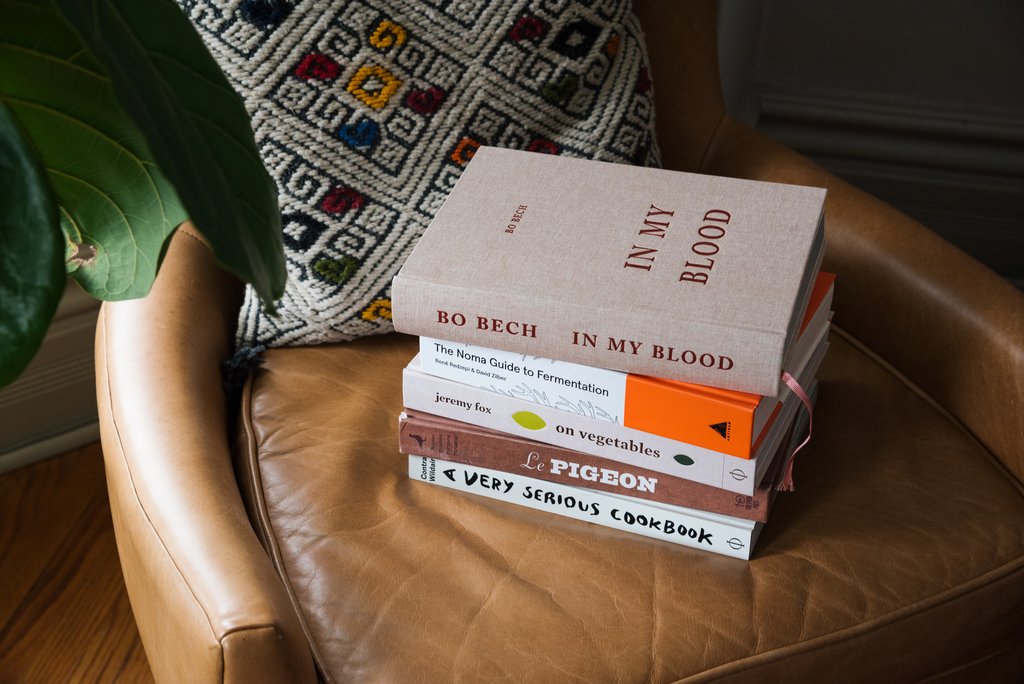 Ravenscroft’s dad got him this Japanese cast iron pan from Knife. He says it’s fantastic for searing meats:

Here are a few of his sharp things: 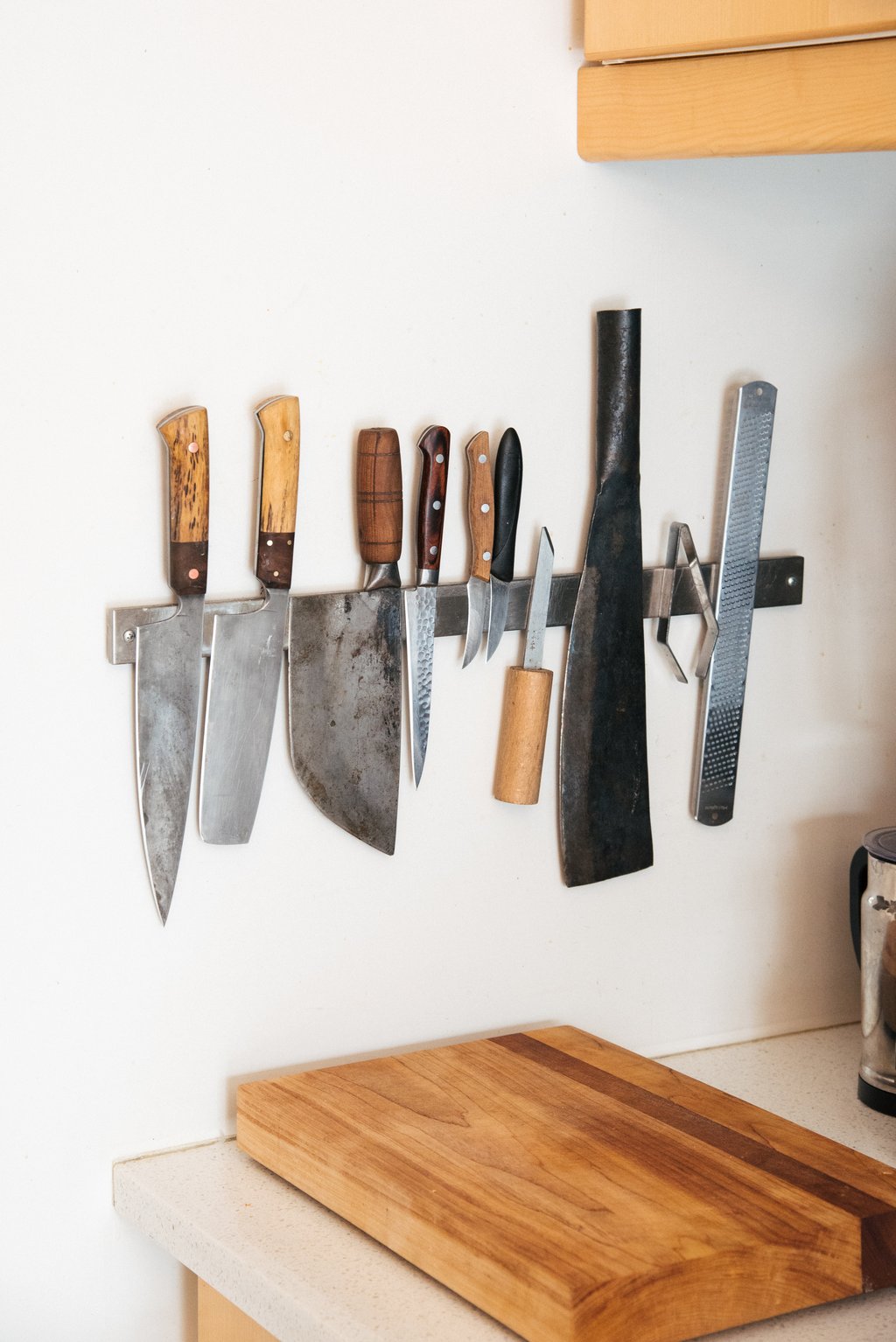