As Rose & Wilder, Anthony Rose and Robert Wilder operate some of the city’s buzziest restaurants, including Fat Pasha, Big Crow and Schmaltz Appetizing. Throughout the COVID-19 pandemic, their restaurants have been outdoor-dining only; now, they’re levelling up, with the launch of Fet Zun Camp, a hunting camp–inspired outdoor dining concept in the space that hosted Madame Boeuf and Flea, their seasonal backyard burger joint. We spoke with Rose and Wilder about the patio, the pandemic and why outdoor dining at Fet Zun Camp is actually meant to be a little uncomfortable.

Rose and Wilder have always wanted to do something like Fet Zun Camp: they’re both avid winter campers and liked the idea of bringing a camp vibe to one of their restaurants. The two entrepreneurs are also no strangers to a good pivot: they’re the first to admit that they have a penchant for flipping their own restaurants. Wilder is usually the brains behind the design, and with Fet Zun, he drew from some cinematic sources. “Half of the inspiration sits somewhere between Moonrise Kingdom and Stripes. I really wanted to do a pole with a giant tent over the entire patio, but it wasn’t feasible,” Wilder says. Instead, white picnic tables, which can seat up to eight, are cordoned off and covered up with military-green, heavy-duty canvas tarps, which are hung from wood slats overhead. Smaller two-tops (transformed from plain white to vivid green and pink plaid by Fet Zun’s manager) are arranged around open fire pits and under heat lamps. Most of the patio is covered, and Rose and Wilder say they have no plans to batten down the hatches any further, even when temperatures drop. That’s because the other half of their inspiration is the popular Scandinavian credo, “There’s no such thing as bad weather, only bad clothes.” 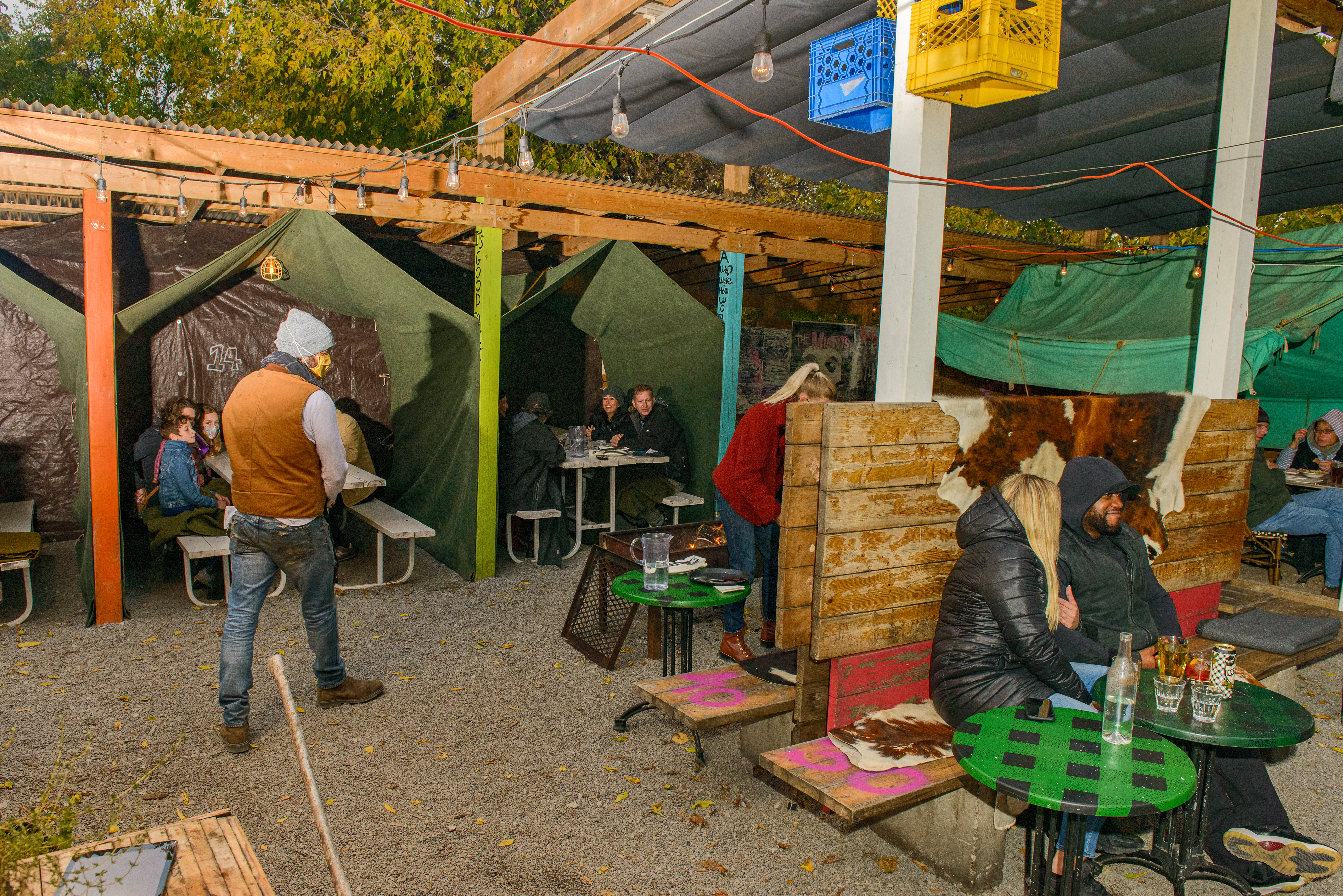 The Scandi motto applied to Rose and Wilder’s design of the Fet Zun Camp patio inasmuch as it let them keep it pared down. They’re mostly hoping that, in external communications and social media posts about the new space, customers will get the hint that it’s kinda like actual camping. “It’s not always the most comfortable thing,” Rose says. “It’s not like we’re going to enclose it more. And we can’t add more fire. So the guests need to step up their game if they want to eat out.” And that’s part of the fun. The two are hoping customers embrace the rugged-Canadiana vibe, and understand that doing so means suiting up—which is to say, bundling up—for the occasion. “We didn’t want every table to be heated, and to be burning propane all winter,” Wilder says. “We’re going to make it like it’s an actual camp. So when you come you’ll sit on blankets, yes, but you should also wear long underwear.” Note: Blankets are provided by Fet Zun, but the long underwear is strictly on a BYO basis. 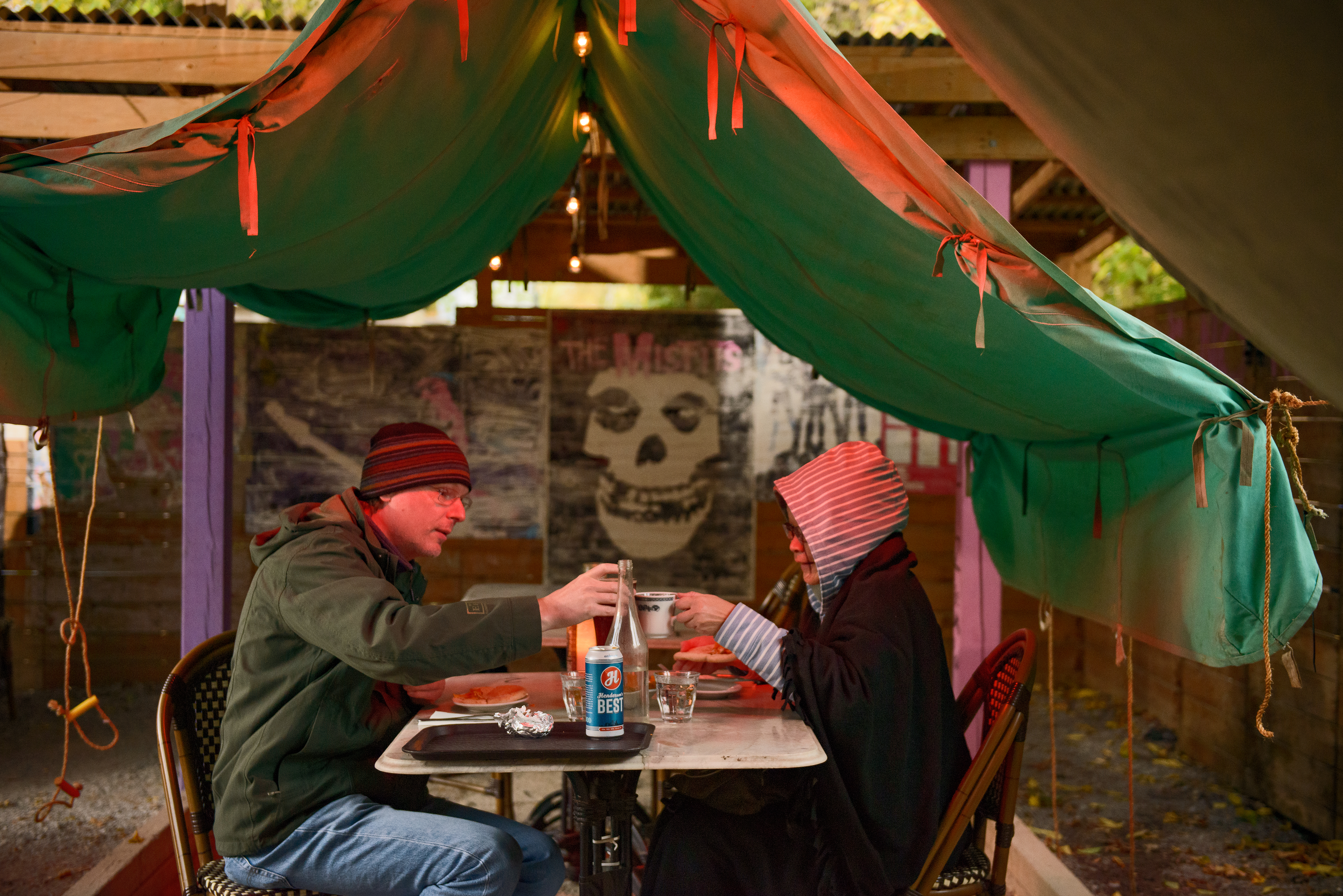 Step 3: Accept that the math might not always work

All of Fet Zun Camp’s large picnic tables could easily fit up to eight people. But on the patio’s opening night, each one only sat two guests (partly because, Wilder jokes, Rose had just sent out a newsletter emphasizing how romantic the new setup is). “If you book one of the eight-tops, but there’s only two of you, you get the whole eight top,” Wilder says. “It’s not great restaurant economics, but we’re not trying to crowd people right now. We’re not splitting tables or trying to jam people in. We’re making sure everyone feels comfortable and safe.” 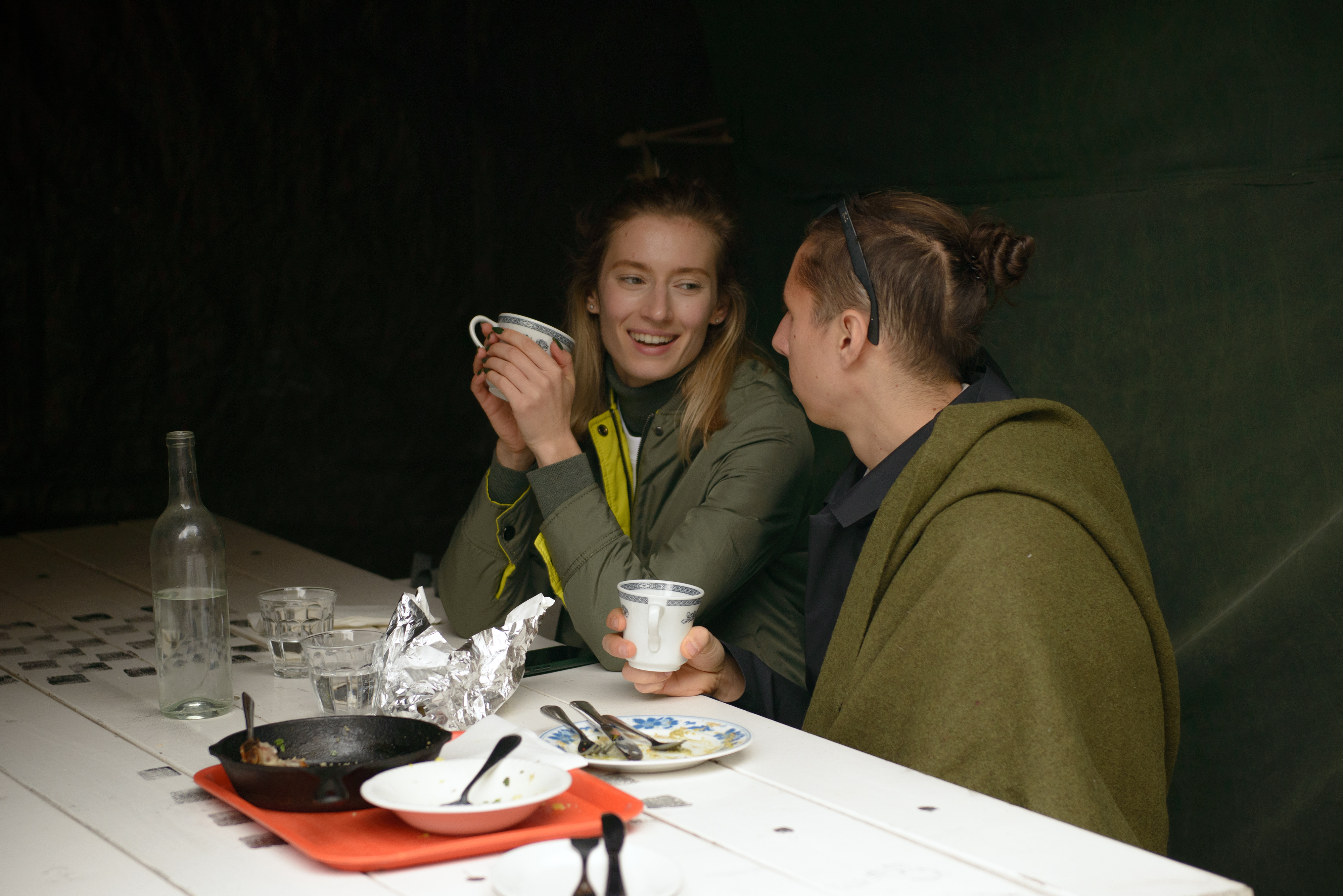 Fet Zun’s menu hasn’t changed much since the launch of Camp, with the exception of a few additions, including a house-smoked brisket plate. Patrons are encouraged to order their food online before they arrive at the restaurant, to make it easier for staff to provide a seamless, contact-free experience (and to ensure the overall comfort and safety of staff). The biggest challenge Rose is currently facing with his menu is the temperature. “Once you put hot food on a metal or a porcelain plate and bring it outside in the winter, it gets cold very quickly.” Fet Zun has started serving its meze plates at room temperature, rather than cold, and wrapping the pitas to keep them warmer longer. Next, they’re simply going to bring food out to diners in covered containers. “I don’t know if it’s the answer,” Rose says. “All I know is that if you close the lid on something that’s hot, it’ll stay warmer longer than it will in the open air.” 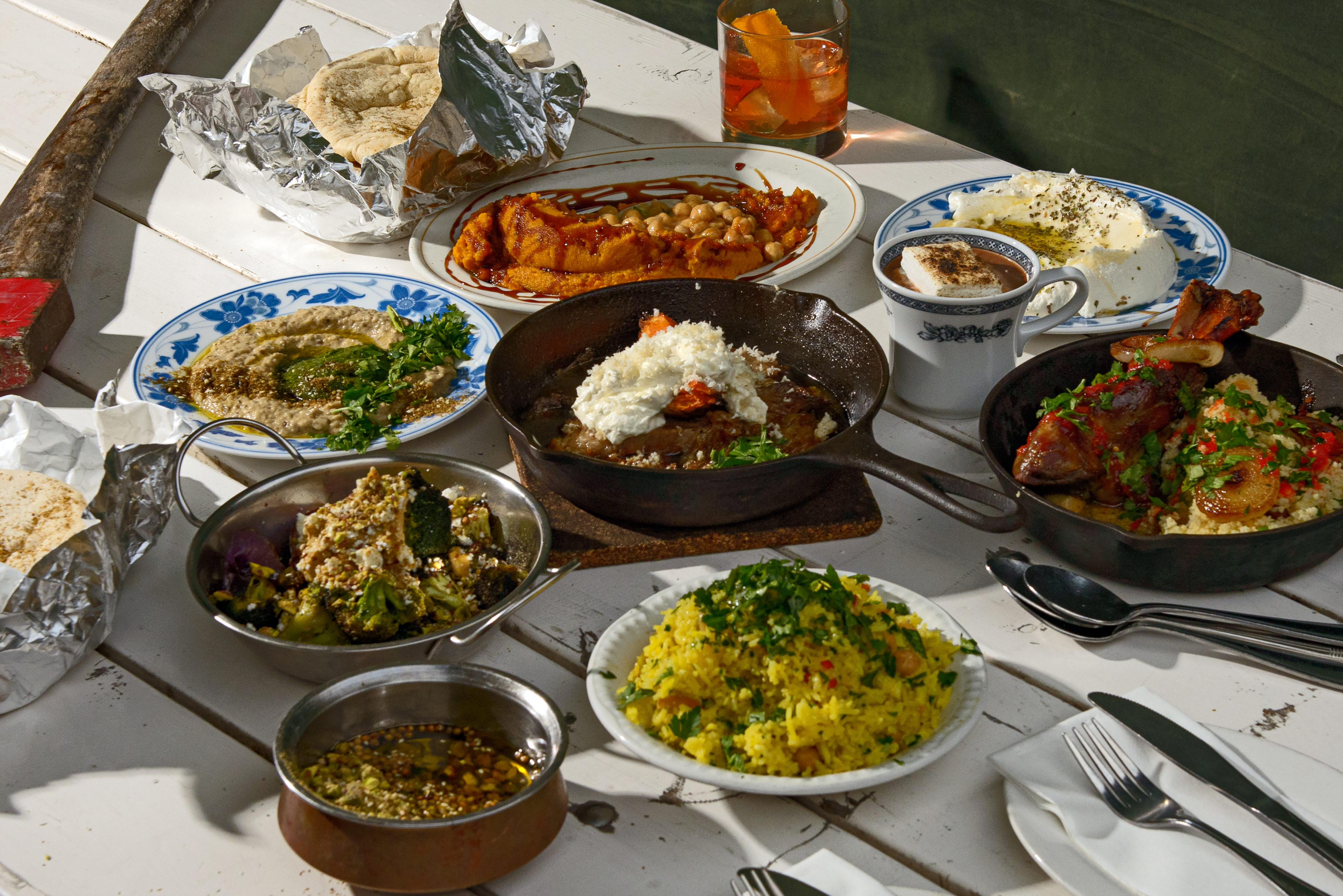 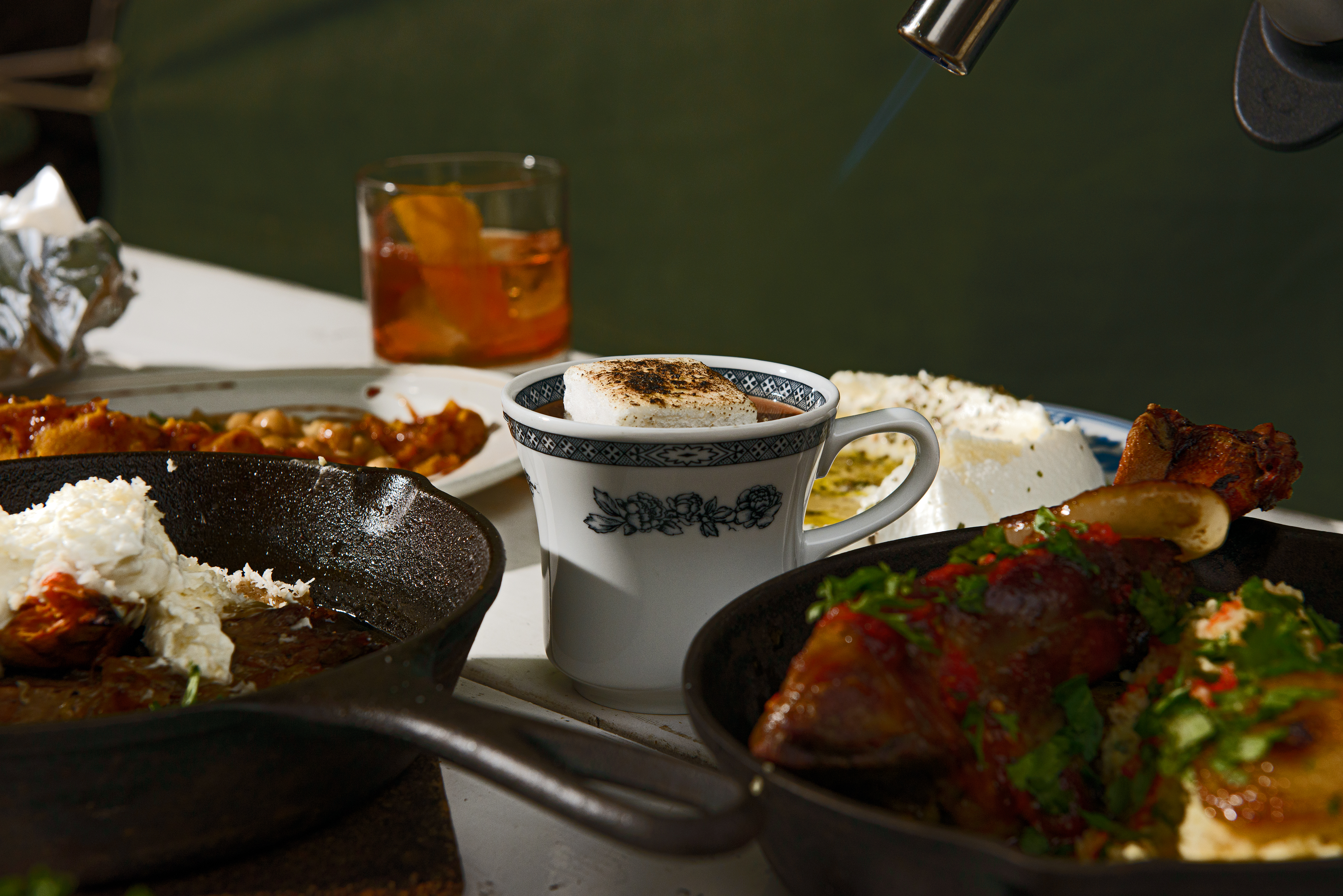 Step 5: Learn from the past, plan for the future

The Fet Zun patio may carry memories of Big Crow, another Rose & Wilder restaurant where patrons could eat outside all year long if they chose. But, as Rose notes, that patio wasn’t nearly as winterized as it could have been. “People would eat out there during the winter,” he says, “just not a lot.” Fet Zun’s canvas tarps, space heaters and two open fires should be enough to keep long-johns-wearing customers warm. Rose and Wilder already like Fet Zun camp so much that they’re planning on bringing the concept down the road: the back patio at Big Crow, just a few doors east, is about to become Big Crow Chalet. The concept, which will have even more heaters and more blankets than Camp Fet Zun, will be a little more apres ski than hunt camp, according to Rose. “We already have a big, open fire pit there,” he says. “So we figured we might as well give it a shot, and keep going with this outdoor winter concept.”