Amy Schumer’s stand-up show, a Japandroids gig and nine other things to do this week

Amy Schumer’s stand-up show, a Japandroids gig and nine other things to do this week

A raunchy Amy Schumer stand-up set
Her fiercely funny sketch show, Inside Amy Schumer, established her as the world’s foremost raunchy voice on gender and sexuality. Her 2015 film, Trainwreck, propelled her to superstardom. Now, Schumer returns to stand-up in a massive stadium tour. If anything can command such a vast audience, it’s her ribald comedy. Thursday, February 16. $39–$140. Air Canada Centre, 40 Bay St., ticketmaster.ca.

Japandroids’ sweaty, celebratory punk rock
The Vancouver indie-rock duo has a rabid cult following (their show at the Horseshoe last October sold out), so we can expect this concert to be a rapturous bash. After a three-year hiatus, their new style is a bit slicker—their latest album, Near to the Wild Heart of Life, has a few more synths and acoustic guitars than usual—but bandmates Brian King and Dave Prowse still churn out sweaty, adrenalin-pumping sound onstage. Friday, February 17 and Saturday, February 18. $32.75–$35.25. Danforth Music Hall, 147 Danforth Ave., ticketmaster.ca.

The best of black cinema
The Toronto Black Film Festival gets political from day one, opening with Tell Them We Are Rising, a documentary about historically black colleges. Also on the line-up: Ella’s Voice, a doc about Ella Fitzgerald; and 9 Rides, a film about an Uber driver on New Year’s Eve that was shot entirely on an iPhone. Wednesday, February 15 to Sunday, February 19. Prices vary. Various locations, torontoblackfilm.com.

Back-to-back blasts of Jerry Seinfeld
What happens to that one sock you lose in the dryer? What do they call those things on the end of your shoelaces? And how exactly do they calculate the expiry date of milk? For 40 years, on screen and on stage, one man has dared to ask the questions that plague us all. In four stand-up performances, you can see the famous anthropologist of minutiae in his natural habitat. Friday, February 17 and Saturday, February 18. $82.50–$128.50. Sony Centre, 1 Front St. E., sonycentre.ca.

A rowdy and raw Run the Jewels gig
The combination of El-P’s sonic ambition and Killer Mike’s emotional heft has led to some of the decade’s most powerful, politically charged rap. Considering the success of their albums (and Killer Mike’s high-profile activism), they could easily fill the ACC, but they’re sticking to small venues to promote their third album, RTJ3. All the better to soak in the raw energy of their apocalyptic songs. Sunday, February 19. $46. Danforth Music Hall, 147 Danforth Ave., ticketmaster.ca.

A fried chicken feast
This Valentine’s Day, the Churchill is hosting a dinner for lovers—fried chicken lovers. You and your partner (or your buddy or your brother or your mother) can enjoy a feast of fried bird (Nashville hot or Vietnamese gà ran), chili and garlic green beans, panko-crusted mac and cheese, slaw, sambal sauce, pickles, dessert and Vietnamese coffee. Nap not included. (For more Valentine’s date ideas, read our V-Day guide.) Tuesday, February 14. $35. Churchill, 1212 Dundas St. W., eventbrite.com.

A strange and stunning ceramic art show
Janet Macperhson specializes in strange ceramic creations that are both beautiful and unsettling. In her works, tiny arms reach out of a whitewashed human heart; an entire zoo of animals peeks out from an owl’s neck; human heads are stitched onto mythical birds’ bodies. For this sesquicentennial show, A Canadian Bestiary, Macpherson has created four installations—inspired by colonization, migration and Canada’s geography—including an immersive trip to the North, with lights that evoke aurora borealis and a herd of mysterious ceramic creatures. Thursday, February 16 to Sunday, May 21. $15. Gardiner Museum, 111 Queen’s Park, gardinermuseum.on.ca.

A tribute to Colin James’ bluesy roots
Maybe you’ve seen James play a rock concert, or maybe one of his swing albums is in your iTunes library—the Regina-born troubadour has a musical persona for every mood. On his new record, Blue Highways, he returns to his blues roots by paying tribute to the genre’s greatest idols. Expect covers of blues classics by Howlin’ Wolf, Jimmy Reed, Freddie King Jr., Robert Johnson and many others. Saturday, February 18. $39.50–$89.50. Massey Hall, 178 Victoria St., ticketmaster.ca. 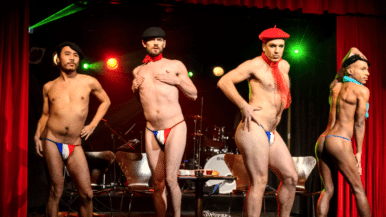 A risqué comedy show, a burlesque bonanza and five other things to do on Valentine’s Day