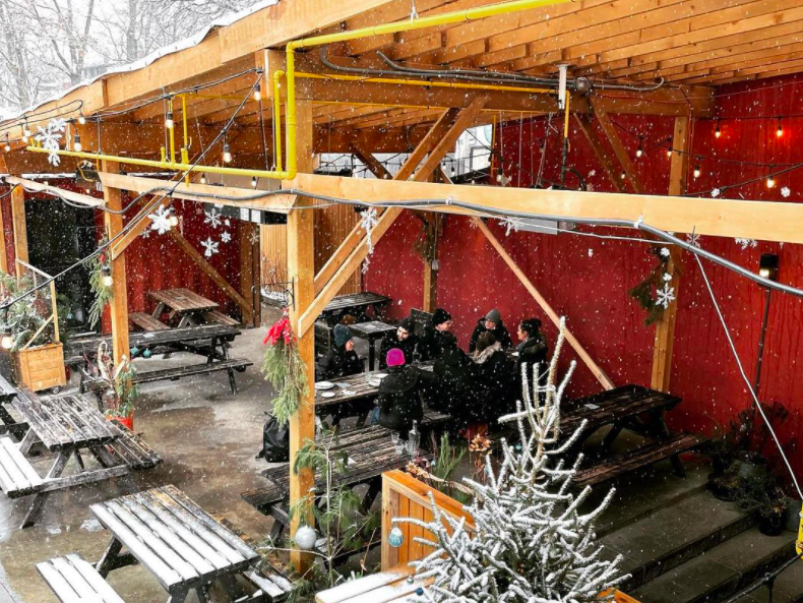 It’s a time-honoured winter tradition for Canadians to build and maintain natural ice rinks wherever they can, be it in their backyards or neighbourhood parks. Toronto even has a dedicated natural ice rinks program, supporting many of them with equipment and instructions on how to safely maintain the ice.

In a city increasingly bereft of free or low-cost spaces for communities to gather—especially during yet another winter lockdown—these rinks are much more than just places for shinny. They’re a means for neighbours to socialize safely, form much-needed bonds, and support each other in ways that often extend beyond organizing the weekly Zamboni schedule. Here are five volunteers on the impact natural ice rinks have had on their communities.

“The rink came about in an effort to save Wychwood Barns from being turned into condos. We made this rogue rink to meet people in the community and get them on our side to wrestle the three-acre property out of the hands of developers—and it worked! At one point, the city was really upset that we made a rink on their property, but now they’re supportive. And we’re far from the first to skate here: there’s a photo in the archives of people skating on the very same spot back in 1905.

Community spaces are disappearing in cities because real estate is so expensive. Our rink offers a place to meet your neighbours, and since it’s attractive to all generations, it’s probably one of the most inclusive spaces around. You see tiny tykes barely able to stand on the ice, and then look over and see a shinny game going on with three generations of hockey players. You get to know the teenagers in the area, and then when you see them again, you can say ‘Hi, how’s it going?’ This rink builds relationships.” —Kevin Frank

“This rink was a winter staple long before I lived here, and I feel so fortunate to be able to help continue this long neighbourhood and Canadian tradition. I’ve heard of the old days, before we had access to the field house, when the fire department would open up the hydrants to flood the rink. Now, the city allows access to the field house for all our events and programming. We get our water from there to flood the rink, and store our hoses inside so they don’t freeze.

The value of the rink to our community is immeasurable. It’s always abuzz with kids of all ages learning to skate or tearing around, chasing and playing. There’s always a spirited shinny game, and we also get lots of teenagers and young adults out to have a bit of fun. The parents skate too, and supervise and socialize, and alternate scraping the ice surface down. But the value of the rink goes way beyond the ice. It brings the whole neighbourhood together. Our mighty team of 50 plus ‘hosers’ who flood the rink every night has become quite the example of how volunteerism, teamwork and camaraderie can enrich and activate our park with very little cost or oversight. Everyone wants to help or be part of it. It inspires a sense of pride, I think.” —Joël Campbell

“I raised my family in East York for 10 years, and there was a wealth of amenities there. When I moved to Scarborough with my family, the situation was completely different. There’s plenty of park space in Scarborough, but nearly no amenities. So two and a half years ago, I started working on a proposal to the city.

We started building the rink in December last year, and honestly, creating a community gathering space was like lighting a match in a room filled with gasoline. Building these nodes of social connectivity—it doesn’t matter what they are, whether a rink, a dog park or a basketball court—is so rewarding for everyone involved. In Scarborough, it’s a cathartic thing for the community to be able to come together, go outside, do something healthy and be safe—especially now, when there’s so much isolation. Thanks to the rink, neighbours who’ve lived on the same street for years have met for the first time. Families with kids in the same schools are making connections for the first time. It’s galvanized the community. But a remaining obstacle is that we have no access to a dedicated outdoor water source—trucking water in is a huge expense, so we set up a GoFundMe to help finance it.” —David McCarron

“I’ve lived in this neighbourhood for 20 years, and I’d say of all the people I know around here, I met half of them at the rink. It used to be a city rink, but it was closed down thanks to budget cuts some 30-odd years ago. People in the community got together to maintain it, and a couple of the people who started it—they’re now in their 70s—still volunteer with us. There are about 80 of us, many of whom have or had kids attend the local school. And our city councillor, Brad Bradford, has been very helpful in getting us funding and support from the city.

It’s huge for the kids, but it’s also been a community gathering place—there’s a fire pit, pizza oven and toboggan hill next to the rink. It’s a great spot to meet neighbours, especially new neighbours. A lot of the people in the past few years who have moved into the neighbourhood—they wander over and then next thing you know, they’re volunteering.” —Adam Elliott

“The rink was a pandemic idea of mine, I guess you could say. Last year, the city was offering permits for communities to build them, and as someone really active in the community, I decided to take the lead. I approached our local butcher—Mark Michelin at St. James Town Steak and Chops—and he sponsored the rink purchase. I put together a band of volunteers, we worked with the city to get access to water, and we got to building the rink.

We had an amazing response from the community. Since the rink can only safely allow five or six people to skate at the same time, it makes the experience kind of intimate. It’s a great place to be together and meet people safely. I’ve heard so many stories of neighbours who were new to skating and a little embarrassed to go to big public rinks, so they came here where it’s less intimidating, to get comfortable on the ice. Every year, I’m hoping to do something that adds to it a bit—last year I did a skate drive and had about 70 pairs donated. This year, I’ve managed to get some funding to get all those skates sharpened, and I’m going to hand them out to people in the community who don’t have access to skates.” —Trish Finkelstein