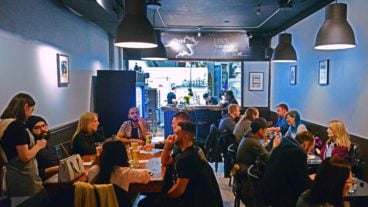 Right inside Loka’s door, there’s an illustration of a hog, its body filled with the names of the 453 people who contributed to the Kickstarter campaign that helped Dave Mottershall find a permanent home for his roving pop-up restaurant. Mottershall is one of those trucker-cap-and-tattoos chefs who can seem like little more than social media phenomena—turns out he’s a sound investment. He espouses snout-to-tail, and is especially inspired by all things pig, curing his own lardo, making chips from deep-fried ear and croquettes from the pig’s head, and transforming the fatty belly into a creamy mortadella, which he braises until it’s as richly flavoured as a rib-eye and serves lightly dusted with an ash made from collard greens. I’ve also had a bright and tasty carpaccio of thinly sliced beets and a house-made ricotta, and excellent roasted sweet-and-sour chicken hearts rolled in molasses and hot sauce, though they were mere detours on the road to pig heaven.