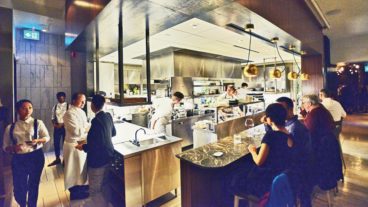 Here’s how I’d like my death row meal to go: light-as-air mini–pommes soufflés dipped in a black pepper aïoli; two oysters, the West Coaster deep-fried, the East Coaster raw and briny and crowned by a baby nasturtium leaf; a puff of beef tendon, greasy in exactly the right way, and the always-a-shock-to-the-taste-buds muskiness of foie gras; a salad of diced hamachi-loin sashimi and marrow jelly; licoricey fennel beurre blanc under a cloud of olive oil foam; fluffy, freshly made cheese studded with chestnuts that have been shaved and toasted into chips; more hamachi, this time from the belly, seared and painstakingly decorated with identical, double take–inducing, alternating micro-spheres of avocado purée and pickled cuke; pine nuts, softened from braising in a broth of matsutake (i.e., Japanese pine mushrooms) and as comforting as a steaming bowl of oatmeal; hefty chunks of Nova Scotia lobster swimming in a miraculously balanced sauce of lime, bonito and brown butter; tender lamb rib-eye soaking up a black truffle jus; and…well, I’m stuffed and I haven’t even made it to the four desserts.

That was the menu on my most recent visit to Alo. Every night has the thrill of a culinary high-wire act—the kind of feat only achieved by experts. Alo is chef and owner Patrick Kriss’s first solo walk after years at Splendido and Acadia, and, before that, studying under the legendary chef Daniel Boulud. There’s nothing like a personal investment to raise the stakes. You can see Kriss in action in the open kitchen, running a brigade of young-buck cooks, pausing (with more and more frequency, as he grows famous) to pose for photos with happy guests. His most ingenious idea is a tasting menu containing options, so his diners get some choice, but he still gets to play with razzle-dazzle ingredients and techniques (impossible to do, fiscally and logistically, on an entirely à la carte menu). But if you’re willing to fully surrender, as I did during that last visit, there are six stools at a black marble counter facing the kitchen, where he’ll cook you an even longer, his-choice tasting menu, 16 courses, every plate a surprise.

After the lobster and the lamb, there was a merciful pause with a plate of Gunn’s Hill artisanal cheese, compressed banana, pears and a wedge of organic honeycomb from an apiary in Stratford. Then those four desserts: coffee chiffon cake that had been dehydrated so the flavours intensified and the cake took on a crackle, paired with a parsnip sorbet, which shouldn’t have worked but did; then a milk chocolate ice cream with sarsaparilla jelly; then an earl grey–flavoured parfait that’s frozen and rolled in crushed cookie, with a jolt of sea buckthorn purée; and, finally, a cream-stuffed pâte à choux and a notoriously tricky-to-bake Bordeaux style of cake called a cannelé, with a caramelized shell and custardy insides. It looked like a tiny hat for a circus dog and tasted like a lighter, more ethereal crème brûlée. I haven’t mentioned the wine pairings, which were clever (Kriss has built a star team), with many rare and trendy bio-dynamic bottles from central Europe and the new world, or the service, which was always present, always thoughtful, without verging into Big Brotherness. If that had been my last supper, I’d be content. But I want to go back tomorrow. BEST BITE: Sea salt–flecked pain au lait, so dense and warm there’s no need for a smear (though why resist?) of the house-cultured butter. 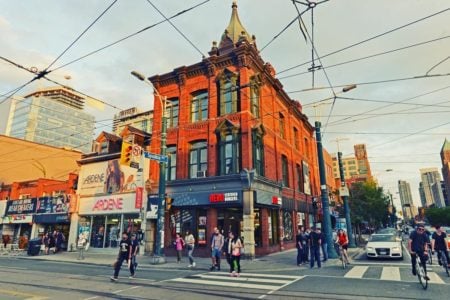 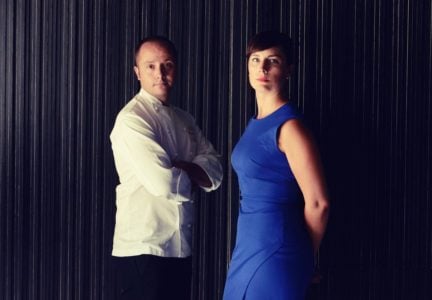 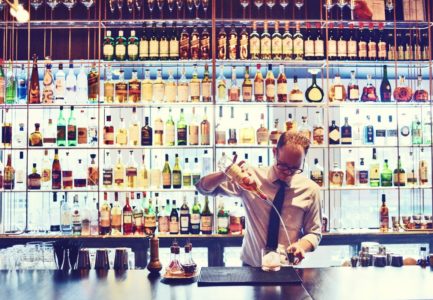 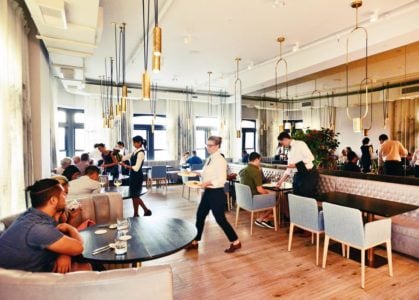